Hiking the 3 of the most beautiful mountains of Romania 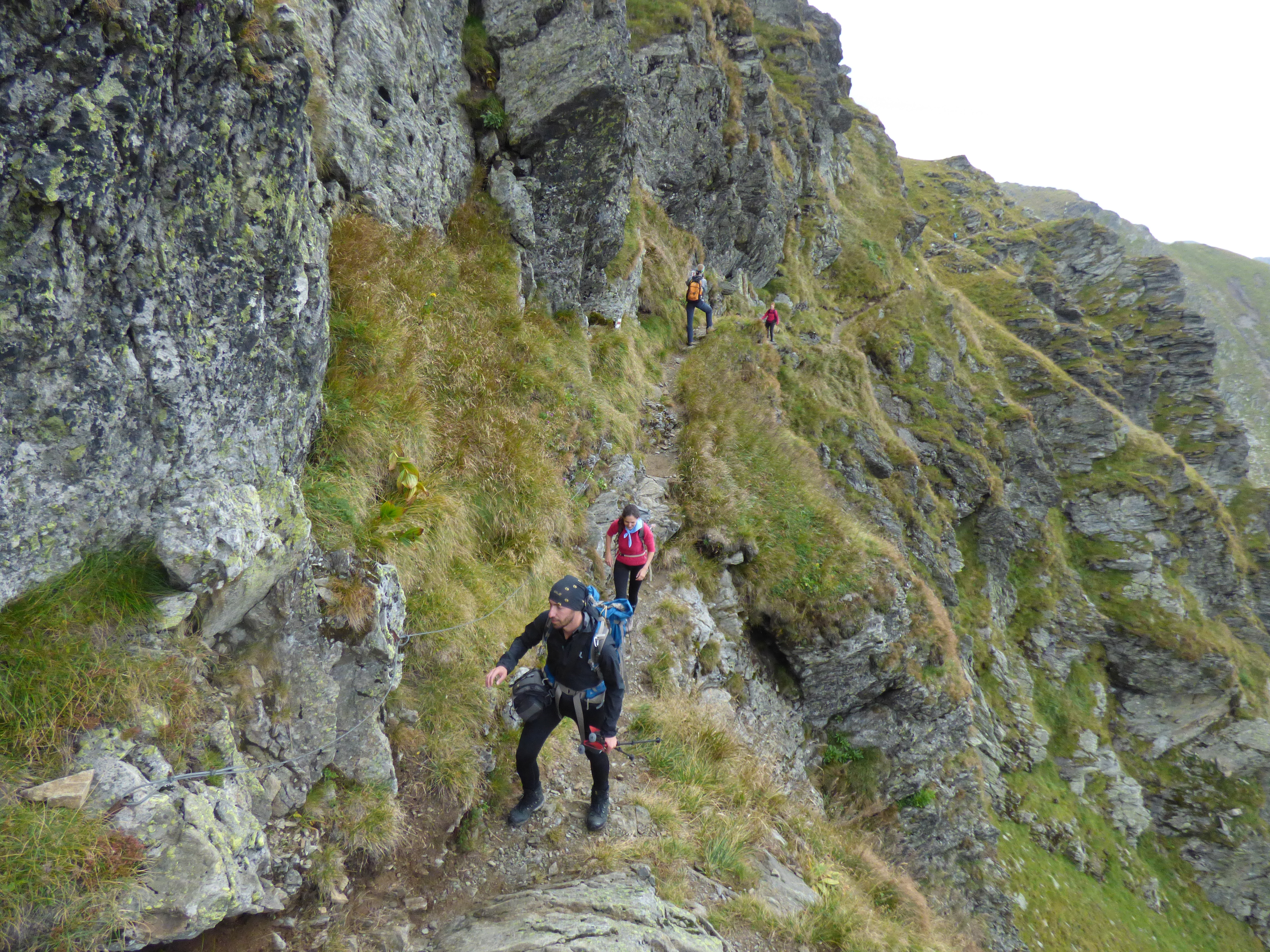 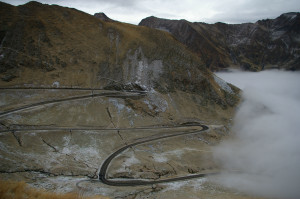 This tour is first about Romania. It is about discovering Romania by climbing her most beautiful mountains, by experiencing the rural richness of Romania and by enjoying the multi-cultural Transylvania, while striking the right balance of physical effort during the hikes followed by cultural dedicated days.

Variety is the main characteristic of this tour, of mountains and of the cultural objectives.

One of the main features of Romanian Carpathians is variety of mountainous landscape. Although neighbors, Fagaras, Piatra Craiului and Bucegi could not be more different:

So, this tour is about hiking in one week on three of the most beautiful mountains of Romania while at the same time discovering the rich rural and cultural areas around these mountains. The highlights of the tour are:

We take the highway towards Pitesti and then Curtea de Arges lovely city. In half an hour from this city we will be then at the beginning of the Transfagarasan road. We will leave the car at a bend in the road and start our hiking tour. We slowly gain height following the river until the trail forces us to the steep banks and then it all starts: the first waterfalls and ladders and bridges come into view. Be prepared with the camera while paying attention where you put your feet on. You will want to take pictures at every corner.

Finally, we feel sorry for actually finishing the canyon route. The remaining route takes us back in an arch to the most impressive dam lake. We must stop to see it, the vertical drop is huge. Then, by following the road, we descend to the car(s).

We take the car(s) and continue on the Transfagarasan road on the right side of the like toward Balea lake. We stop for the night at one of the cabins on this road just before the alpine landscape starts.

We get up early, have breakfast and by 8.00 we are again on Transfagarasan road. We continue on this road (opened only from June to September) getting dizzy from time to time because of the sudden steep bends of the road and passing through 1Km tunnel we end up on the North side of the mountain at Balea glacier lake.

This is the spot where we leave the car(s) and start hiking.

In less than an hour, after climbing a rough slope we reach the main ridge trail of the Transylvanian Alps. Our objective for the day, Negoiu Peak, closes the Western horizon for us, after the long and spectacular section of ridge that we must pass in the following hours.

We follow then the ridgeline, climbing up and down several times, up to Caltun Glacier Lake, where the path broadens. The lake is surrounded by big boulders and the high walls of Lespezi and Caltun Peaks.

We continue towards our goal and after climbing up a beautiful chimney we are getting closer to our target. We reach finally the second highest peak of Romania after a five hours hike. In the distance both West and East, unnumbered peaks and ridges make the eye stop and wonder. Transylvania’s plains and hills are as well at our feet.

We return to Balea lake following a different path, under the ridge, on its South side.

10 or 11 hours after we started we are back at the car(s) and start descending the road towards Transylvania and Sibiu, the city where we will stay the next two nights.

This is a rest day, dedicated to rural and urban impressions. Thus, we will enjoy Sibiu, a former cultural capital of Europe back in 2007. Our objectives or choice are the Museum of Village – a must see for the old houses which were build en purpose for preservation, the wonderful village of Rasinari and the old town of Sibiu, a wonderful Saxon imprint.

It’s time for the second mountain of the tour. After the highest range of Romani, we aim for perhaps the most beautiful: Piatra Craiului.

We need to start early because before hiking we have some road distance to cover, following to the East the line of the Transylvanian Alps. We should start the hike before 10.00.

After we reach Zarnesti, the main city at the foot of Piatra Craiului, we take a Western country road which follows the river Barsa. In about 10 km we will be at the start of our hiking route. Almost all the West side of Piatra Craiului is visible from this spot offering us a continuous unbroken vertical wall of more than 1000m. It is breathtaking! And we shall go right at it.

Our trail of choice for climbing up is called Braul Cioranga Mare. As with all the other Western side routes of Piatra Craiului, we need first to reach the base of the wall through the steep path through the forest. We will reach in one hour and half the shelter called Hope which is strategically positioned at the food of several climbing routes.

Just behind the shelter we are starting on Braul itself – an ascending trail which goes parallel with the North-South direction of the mountain below the ridge. For more than two hours we will hike just beneath the huge amazing walls and, if we are lucky, we will see some shy mountain goats. The exit on the ridge is just on Varful Ascutit (the Sharpe Peak) which, contrary to its name, is not at all sharpen but rather round.

We are on the ridge and the view is magnificent: Zarnesti at hour feet and mountains all around us. But the true image that lingers long after we will be back in Bucharest is the long sharpen ridge of Piatra Craiului. And yes, there is a trail following it.

We are actually going to cover a little of the ridge itself. We head East following the ridge path up to another peak, called Padina Popii. From here we start to descend on a trail called Brana Caprei. It is as magnificent as the one we climbed up, but more direct and steeper.

We reach back the car(s) after an exhausting but rewarding day and stay on this river valley for the night.

Maintaining the rhythm that we set up for the tour, respectively one day hiking and one day active rest by visiting the cultural landmarks of Transylvania, this is the day we reserved for visiting the core of the province.

Sighisoara is the main objective of the day, but not the only one. In about two hours and half by car we will be in the very heart of Transylvania. The medieval citadel of Sighisoara is one of a must see places in Transylvania. With its walls, churches, guild towers, restaurants this city is made to charm. Just keep in mind that the old medieval houses in the citadel are still inhabited. Every year here a medieval festival takes place.

On the way back to Brasov we pass to Viscri and other Saxon villages where we will visit the fortified old medieval churches. You know, here is where Prince Charles of England bought a farm and spends summers.

The evening will find us in Brasov, one of the most engaging cities of Romania and probably the best place to live if you are an outdoor enthusiast.

The time has come for the third mountain of the tour. This time is Bucegi. As usually, we have a long and difficult hike in store for the day so we need to start up early. For about three hours we hike through a wood trail until we reach Malaiesti hut.  This is surrounded by a gorgeous ladscape. Just in front of the hut raises the huge wall of Bucsoiu.

After a break for a tea at the hut we continue through a highly glaciated landscape (with no glaciers of course). The trail gets steeper and will take us at the entrance of a huge and wide chimney which will take us 30 minutes to pass it.

We are now on the plateau of Bucegi Mountain and at our feet we have another glaciated valley, Gaura (the Hole), the biggest one of the Mountain. Finally, after 5 to 6 hours of hiking we are at the hut standing on top of the highest peak of Bucegi (2507). It is also the highest standing hut in Romania. Four valleys start around this peak which has a fantastic vantage point. The mountain resorts of the Valley of Prahova come into view. Piatra Craiului and Fagaras, the mountains we hiked the other days are lying to the West.

We start climbing down following the same route. We will eat a late lunch at Malaiesti hut and then finish the hike late evening. We will stay for the night in Rasnov.

This day we return to Bucharest, but only after we experience a little bit more of Romania. We avoid the crowded Prahova valley and take probably the most beautiful pass of Romania which links Transylvania with the old kingdom of Romania.

We pass just below the Bran castle, where the Dracula legends were born and then a mountain road will take us in the Pestera village. This is a place for sure we would have liked to stay more. It is a spread village, we houses on top of each hill just between Piatra Craiului and Bucegi mountains. This is the most beautiful rural landscape of Romania.

After spending some hours in this village, we continue to South until we exit the mountains. At this very exit there is a Mausoleum, a reminder of the fights which took place here during the First World War. It is a interesting visit.

In two hours from here we are back in Bucharest. 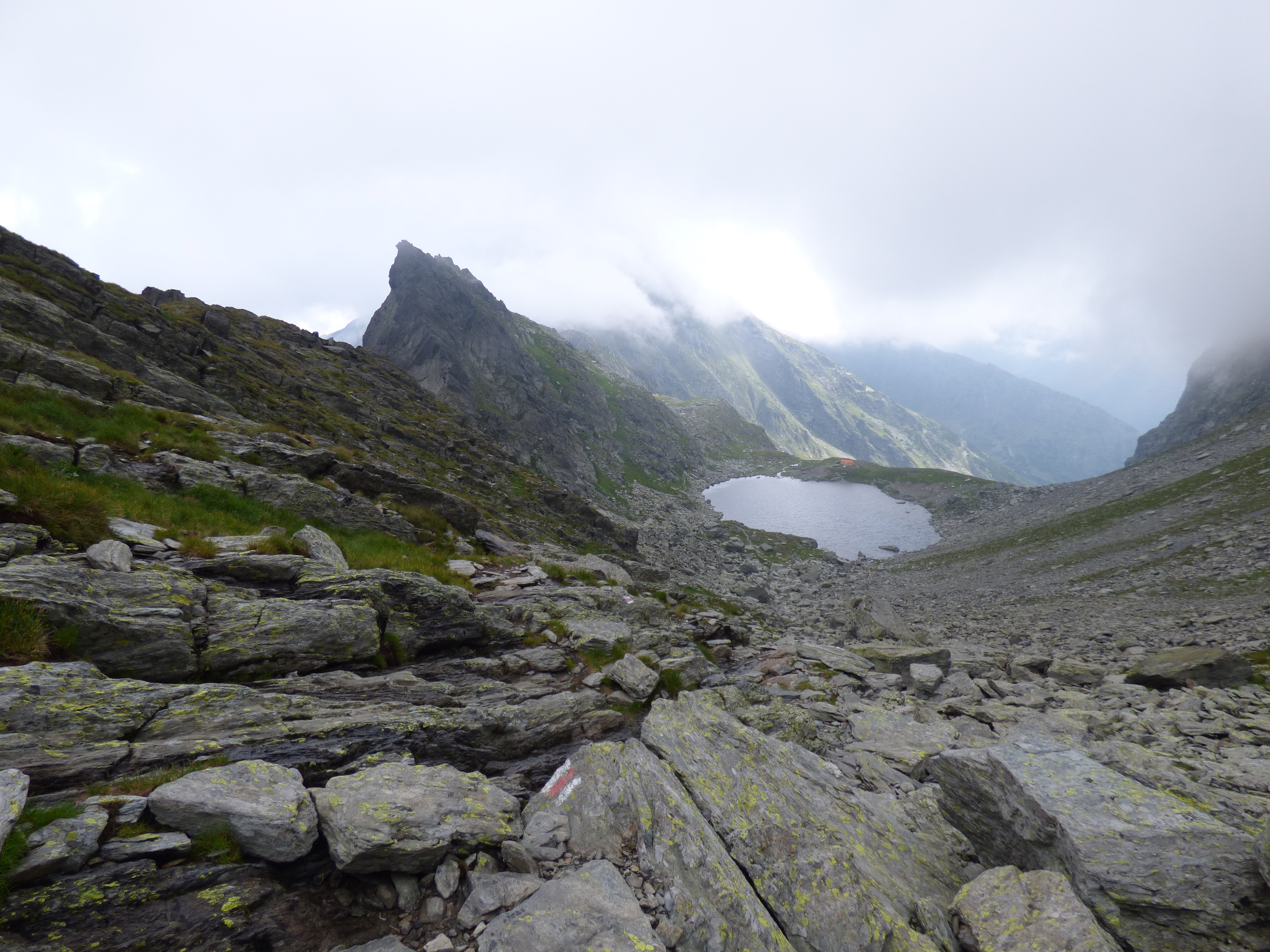 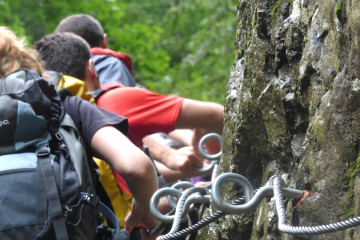 Fagaras is the biggest, highest and probably
1 day
Hiking 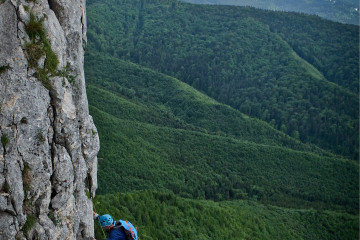 If YOU opened the page of this
1 day
Climbing 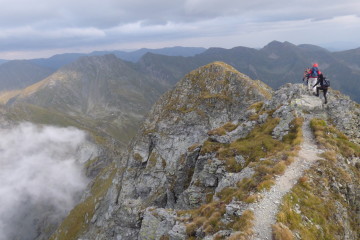 Fagaras is the biggest, highest and probably
1 day
Hiking
1,300.00 €
One tour per person